I survived working the whole weekend~ yay! I didn't quite make my usual 3 12 hr shifts, but I think working 12 then 8 then 12 was a pretty ambitious start.

This week J starts moving things home, which means that I need to finish (okfine, start AND finish) moving things out of his old/new bedroom. I have gotten all my tablecloths and placemats out of the big cabinet, and as soon as I rest a little while I blog, I'm going to move the fiesta off the six little wall shelves. No clue where/how I'm going to relocate it, but I'm taking this one step at a time. Once J gets here, I'll have him move the totes full of my Universal Woodvine and Paden City Ivy dishes upstairs to the walk-in attic, help me dismantle the full size bed and take it to the bedroom upstairs, and relocate a cabinet from upstairs to the dining room to hold (i hope) all the linens. I'll try and post a few pictures of all this chaos in progress.

I had forgotten how pretty some of my tablecloths really are... I wonder if now's the time to try and take pictures, measure, and catalog my linens...? I know, starting a second big project in the middle of a first huge project might not be the wisest choice. It sounded good, though.
Posted by Elaine at 12:20 PM No comments:

Email ThisBlogThis!Share to TwitterShare to FacebookShare to Pinterest
Labels: tablecloths

My son is moving back home. He had been renting a house WAY out in the country (the directions include "you turn off the dirt road..."!!) with his buddy Charlie. This summer Charlie was activated and is on his way to the sandbox. John could afford the house on his own, but since he was nearing the end of their lease asked me if I would mind if he moved back home, so that he could put more money aside toward the downpayment on a house. He also offered to share expenses for utilities, etc. Nice offer, I thought. I'm glad to have him back. We get along well, always have, and I like that he's being practical about wanting to save and buy a house. He likes to cook and has surprised me many times in the past by having dinner prepared. We're both blunt, and mostly that's a good thing.

I'm lucky that J has a good job and a good head on his shoulders. He really wants to do things the right way. Not many 22 year olds own their vehicles outright, have no outstanding credit card bills, and have already settled into their dream job. He continues to have at least a couple of good guardian angels looking after him (Thanks Dad and Hank).

I've had people ask me if I worry about J on the job. I guess maybe if I hadn't grown up as a police officer's kid, then became a police officer's wife I might worry more as a police mom.... but the simple truth is that I don't really know any other way of life. J is well-trained, has good people working with him, and looks forward to going to work each day. I am thankful for all those things, and try not to devote any of my energy toward negatives. Sure, bad things happen all the time, but this isn't something I can control. I CAN control my actions/reactions.

Every police family deals with the stress differently. For me, I have a need to leave the scanner on when he's at work. Some police wives/moms/families refuse to even have a scanner at home, and I can understand why they feel that way. It can be intrusive. But for me, it's a security blanket. Knowing is always better than not knowing. Hearing his voice or number as part of my background noise means that things are ok. J and I both work nights, so a lot of the time I'm at work when he is. (also a bonus since we both have to sleep during the day)

There will be a period of adjustment, I'm sure. I'm also pretty sure he still goes through at least a towel a day, and has forgotten how to put the toilet seat down. I'll have to start leaving a robe in the bathroom again, and it's only a few weeks til John and I can start the battle of the thermostat. I wonder if he's learned how to unload a dishwasher in the last year?
Posted by Elaine at 9:51 PM No comments: 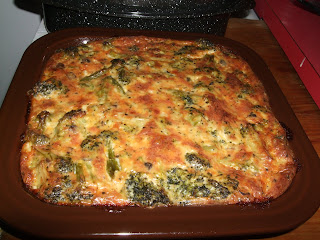 I don't know about you, but when I'm feeling bad, often I turn to old favorite foods to help me feel better. No clue how it works or why, but things like this broccoli casserole are on my mental list of Foods That Make Me Feel Better. Others include Potato and Cheese Soup, Pot Roast with Baby Carrots and Potatoes which also means that I can immediately make Vegetable Soup from the leftovers (and sometimes even from the before they ARE leftovers!), Chicken and Dried Beef Bake, Stuffed Peppers, Home made spaghetti sauce like my gran used to make, and Pinto Beans and Cornbread. oh, and can't forget southern style cooked kale. I also love Potatoes au gratin, freshly made rolls, and biscuits and sausage gravy, but as much as I love eating them, I don't love how icky I feel afterwards.

I had such a rough day yesterday that it seemed Broccoli casserole worthy. It hasn't been but a couple of weeks since I last made one, but I had the stuff, and I wanted it. Reason enough.

I love the square fiesta bakers. I have two: cobalt and chocolate. The cobalt was in the dish washer, which made the decision of which to use easy!
I only have one rectangle...might have to rectify that at the tent sale this fall.

Posted by Elaine at 6:31 PM No comments:

So... Sunday was my first night back at work. It's hard to believe that three MONTHS have already passed since the talented Dr. LeBolt took out the icky arthritic knee and put in a shiny new replacement knee. I wish now that I had blogged through the process. I haven't had a day that I've regretted the surgery. Even the bad days are better than the pre-op days.

It was great being back at work. I missed my coworkers, and really, I missed the patients, too. I love what I do, like the pace most of the time. My supervisors at work have been very supportive, and actually scheduled a second person to be with me Sunday night, so that I could better gauge how I was handling the workload, and so that someone else could help with some of the heavy work (trust me, pushing stretchers is VERY heavy work, at times). I did really well for the first eight hours of my normal 12 hour shift... then I started getting knee twinges, which evolved into constant pain, then... well, you get the direction things went from there. By the time I left Monday morning, I was (once again, just like pre-op) dragging my left leg behind me. ugh.

I totally lost yesterday. Normally when I work off a three day stretch, I try to only sleep a few hours in the morning, or stay up so that I can swap and be a "normal" person and sleep that night. I didn't quite manage that yesterday. I took some medicine (first time in weeks that I had to do that) and made it as far as the couch in the living room,got a couple ice packs, propped my leg up and crashed.
I woke up a couple of times, but for the most part I was out the entire day AND night.

Elaine
Blue Ridge Mountains, Virginia
I live in the mountains in Virginia with my son and his dog. I work in health care, and collect pottery, mostly made by Homer Laughlin China Co., as well as vintage tablecloths. I like to garden and cook, although my son will tell you that baking is NOT my forte. I guess chocolate chip cookies really don't need that carbon layer, after all.